Rails is a web application framework written in Ruby, also known as an MVC, or Model View Controller.  Rails has two major philosophies: (1) DRY (“Don’t Repeat Yourself”) and (2) Convention Over Configuration, meaning Rails has a right and wrong way of doing things, and if you follow the Rails way, you shouldn’t have to configure every aspect your web application yourself.

Assuming you have set up your Rails environment, generating a new Rails app is easy.  To generate a new Rails application, type rails new name-of-project into your command line.  Once this is complete, opening the project directory in your text editor will reveal the complete Rails framework, which contains the directories in which your models, views and controllers will live.  Reviewing the Rails documentation will help you understand the role of each directory.

Most Rails developers use Rspec to test their programs.  To forego setting up the default test suite, enter -T at the end of the above command.  To use Rspec, add the Rspec gem to the Gemfile.  After you have added Rspec and any other new gems, run bundle at the command line.  You are now ready to build your Rails application.

Say you want to build a blog platform that includes posts and comments – you would need a Post model and a Comment model.  Before generating models, it’s important to think through what attributes your models need.  Your Post model likely needs a title and content, and your Comment model needs content and will be attached to a post.  Therefore, your commands would be the following:

A model is typically singular and its attributes are written as follows: attribute:type where type is either string, text, integer, date or a variety of other types which are detailed in the Rails documentation.

ActiveRecord, or the Rails database, will automatically generate a primary key for each model.  However, you must manually include a foreign key (post_id:integer ) if a foreign key is necessary, such as when one model belongs_to another. Once complete, your terminal should look something like this:

If you go to your directories, you will see that two model files have been added to your models folder: post.rb and comment.rb.  Each folder contains an empty class which inherits from ActiveRecord::Base:

Creating these models also added migration files to your db/migrate directory – create_posts and create_comments with timestamps.  These files contain the ActiveRecord migrations for posts and comments, which basically means they set up the database tables for each model:

As you can see, each migration sets up a table containing the attributes set forth in your models. ActiveRecord automatically adds a timestamp.

ActiveRecord associations and validations must then be added to the models (to learn more, see the Rails ActiveRecord Associations documentation).  For example, you want to let your program know that a post can have many comments, while a comment should belong to a single post.  You also probably want to make sure that before a post is generated, it contains a title, and that a comment contains content.  Once this is complete, your models should look something like this:

There are many types of validations, which can be reviewed in the Rails ActiveRecord Validations documentation.

Although your tables are laid out in your migration files, the tables are not generated until the migrations are actually run.  To do this, enter rake db:migrate in your command line.  Your command line should output something like this:

Migrating will also generate a schema.rb file containing the schema for your application:

Now, if you enter rails s in your command line and open localhost:3000 in your browser, you should see your Rails application with a message letting you know you’re riding Ruby on Rails!

An ApplicationController is automatically generated with any Rails application.  You can find this in the controllers directory:

The purpose of a controller is to receive specific requests and to collect information related to the application.  The router (discussed below) determines which controller receives which requests and through what action.  Each action’s purpose is to collect information to provide to a view (also discussed below). Controllers can be thought of as the middleman  between models and views.

If you return to your directory, you’ll notice that in addition to your application_controller, you now have posts_controller and comments_controller files, both inheriting from ApplicationController:

If you check your views directory, there should now be subfolders for posts and comments, which will eventually house your views.

At this point, you have a routes.rb file, but no routes set up. You know this, because if you enter rake routes in the command line, the following output is generated:

You can add routes by adding the following:

As you can see, the comments routes are nested in the posts routes. It’s common to nest resources which are essentially children of other resources. You used :only to instruct Rails to generate only the specified routes.  So, for :comments, you want to be able to create a comment, but the comments will otherwise be viewed only in the routes generated for :posts.

Now, if you enter rake routes, you can see that several routes have been generated:

The below graphic helps explain how resources generates routes and what each route is used for: 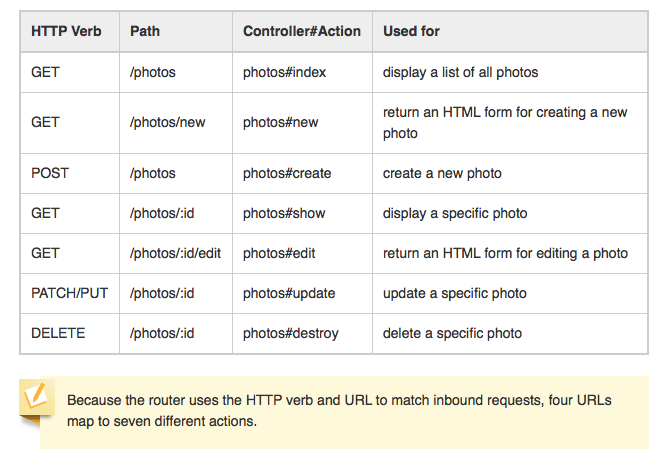 As you can see, you currently have the seven routes listed in the above graphic for posts (eight since PUT and PATCH are listed separately), the root directory and the create route for comments.

As indicated, the above graphic displays four URLs which map to seven actions (or methods which you will include in your posts controller):

You’ll notice that edit and update seem familiar; however, one is a POST request and the other is a GET request. To learn more about how resources generates these routes, see the Rails Routing documentation.

At this point, without the commented text, routes.rb should look something like:

The purpose of a view is to display information in a human-readable format, such as HTML. To display the information from the controller, Ruby is embedded in the HTML so the application’s information can be rendered by the browser.

Although you’ve created the above routes, if you open the rails server and go to localhost:3000/posts (which is the posts index page), you will get a Rails error letting you know that “The action ‘index’ could not be found…”  This is because you have not created the associated views.

To create the index page for posts, add a file called index.html.erb to the posts folder.  You can even add some test text to confirm that Rails is loading the correct view.  Once you have done this, open localhost:3000/posts.  You should see the view you just created.

There will not be any views generated for comments specifically, as comments will be displayed in the same view as the posts to which they correspond. The form to leave a comment will also be in a posts view.

You now have your controllers and views partially set up.  To complete your blog application, you need to be able to add a post or comment in your views which will be stored by the controllers to be generated in other views.  Routes serve as the connection between these actions.

There are seven methods that should be included in your posts controller (corresponding to the seven actions described above). The comments above each method describe what the method does and to which view it corresponds:

Although there are no specific views for the comments, you still have to set up the CommentsController:

Now that you have set up your controllers, you know exactly what each view must contain: (1) posts/index.html.erb will list all posts and contain links to the views for new, show, edit and delete, (2) new.html.erb will include a form for creating new posts, (3) show.html.erb will display a specific post, and will also be the view from which you can update a post, delete a post and create a comment for a post, depending on what link you clicked on to get to the show view, and (4) edit.html.erb will contain a form for editing a post.

To see the views, please review the repository on GitHub. Once the views are set up, you will have a working Rails blog application.