Ruby shares many similarities to other programming languages, but its loops are quite different, mainly in the way they are initialized.  For example, in C and many other languages, a for loop would be initialized using something like:

This means i (which was declared as an integer) would start with a value of 1 and the loop would increment by 1 as long as i had a value of less than or equal to 100.  Seems simple enough.

In Ruby, the same for loop would be initialized with the following:

This is simpler and more powerful, but still accomplishes the same task – the value of i in the first iteration of the loop is 1 and the loop continues to increment by 1 while the value of i is less than or equal to 100.  There is no need to declare a variable type in Ruby.

This brings me to FizzBuzz.  Although the Ruby for loop initializes quite differently, the conditions inside the loop remain the same: 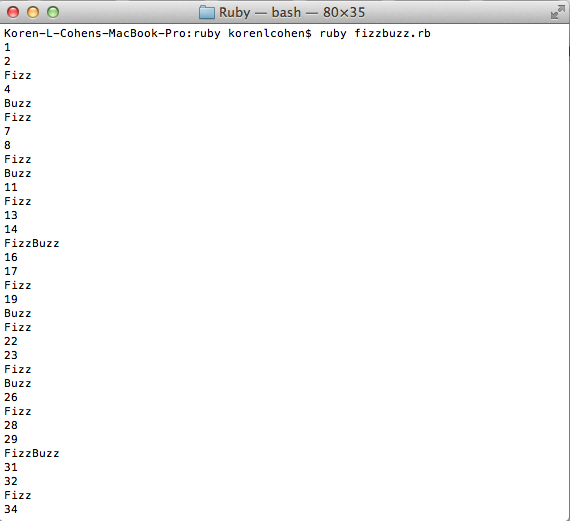 Of course, there are minor changes in syntax between C and Ruby: (1) else if  becomes elsif , (2) printf  is replaced with puts, and \n  is no longer necessary, (3) curly brackets and semicolons are removed, (4) instead of return 0;  the loop terminates withend , and (5) variables are referenced differently when printing – (“%d”, i)  is replaced with “#{i}” .